You drive the living energy using your intention, don Benito explained, and the primary technique for getting stuck energy moving again is saminchakuy.

I get a lot of questions about some of the most basic, but important, energy practices of the Andean tradition. So in this post, and in a series of posts after this one, I want to talk about energy dynamics from a few different perspectives. Today, we’ll look at saminchakuy, a topic I have talked about at length about in multiple blog posts. It’s worth revisiting this subject.

Let me own my bias about what it means to claim you are following this path. For me it means you actually know and use the fundamental techniques of the tradition. Yet, it amazes me that so many people who have been on this path  for years don’t know the single most fundamental energy practice of the Andes—saminchakuy. Just about everything “energy” in the mystical tradition is based on this practice.

Everything is made of sami (the most refined kawsay, or living energy) and the very term saminchakuy means something like “making/working with sami” or “taking action with sami.” This practice is the basic “cleansing” practice. Just like the skin on your body needs to be washed in order to maintain your health, so does the “skin” of your poq’po (energy body or bubble) need to be cleaned of hucha. Saminchakuy is like taking an energetic shower. However, it’s important to understand that “cleansing” is a metaphor, because hucha

is just slowed or blocked kawsay/sami. It is not dirty or contaminating, but it can affect your ability to be in effective reciprocity (ayni) with the living universe. Saminchakuy gets this slowed kawsay (hucha) moving again, and by doing so tremendously improves your capacity for well-being. You could also say, again metaphorically, that in relation to your well-being, it ramps up your energetic immune system.

Saminchakuy pervades the tradition. So much of Andean practice is some variation of saminchakuy that not knowing about it may cause you to miss what is going on around you when you work with the paqos.

When you hear the Q’ero or other paqos sing or pray, you will often hear this word or some variation of it in their songs or prayers, as they petition the apus or Pachamama to receive their hucha. I was recently in Peru as part of a group, and we had the good fortune to spend several days working with a group of Q’ero paqos. During despachos I heard them whispering this word (saminchakuy) as they sought the blessings of the teqse apus. In effect they were asking, “Clean us, clean us.” This makes perfect sense since the despacho is the primary ayni ceremony and the despacho bundle is a great eater of hucha.

When you watch paqos work with their mishas, they most often are running it down a person’s body to release hucha. They basically are doing saminchakuy with the misha 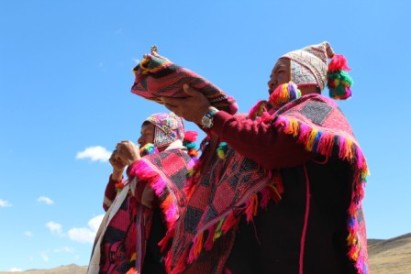 (as a result, it is also called mishachakuy: literally taking action with the misha). Like a despacho, the misha is a great eater of hucha. The downward movement of the misha (or a despacho bundle) over the body is a type of saminchakuy. They usually make sure they run the misha or despacho over all twelve ñawis (mystical eyes) and four chunpis (energetic belts), cleansing them of hucha and empowering them with sami. If you don’t know or understand saminchakuy, you might miss the actual intention of what they are doing with their mishas and despacho bundles.

To benefit from saminchakuy, you need only practice it ten minutes once or twice a day. The benefit is more perfect ayni. Everything in the Andean mystical tradition is based on ayni—moving energy through intention in reciprocity with the kawsay pacha. The quality of your ayni is dependent of the state of your poq’po—the more sami, the most effective your ayni—and vice versa. Saminchakuy is the core practice

for creating a coherent and “clean” poq’po, so it directly impacts your capacity for ayni (or, to put it another way, your personal power ). It also impacts  the quality of your consciousness. As you cleanse your energy body, you perfect your ayni, which in turn helps you move up the stairway of the seven steps of consciousness. This is why don Benito Qoriwaman said that with saminchakuy alone (often supplemented with the empowering companion practice of saiwachakuy), you can reach the sixth (and possibly the seventh) level of consciousness. Saminchakuy, thus, is absolutely fundamental to your practice as a paqo and your personal development as a human being.

Can you follow the Andean tradition without knowing saminchakuy? Not really. It is simply too fundamental a practice.

Have I convinced you that you need to know and practice saminchkauy? I hope so.

Photo 3 is courtesy of and copyrighted by Lisa McClendon Sims.