Back in 2015, I wrote a post about the significance of the date of August 1 in Andean mystical practice. I am going to revisit that topic here so that you can prepare for this auspicious day.

August 1 is called Pachamama Day, the day on which the Apus and Pachamama 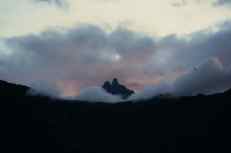 “awaken” to hear our prayers and accept our offerings. Of course, they are always “awake” and available to us, but on this day they lend an ear in an especially attentive way. In a sense it is a kind of mystical New Year’s Day, one on which paqos undertake personal work and ritual from feeding their mishas to honoring their spirit guides. (As a note of reminder, the word Pachamama, while commonly used to refer to Mother Earth, is really the name for the Mother of the Cosmos. She is the entire material, physical universe. Mother Earth as the planet is Mama Allpa). So, this is the day we set aside special time to be in ayni consciously and purposefully with the universe of living energy and with all the physical manifestations of that living energy, such as the various spirit beings. But most importantly, at a personal level, it is about undertaking a conscious, personal mast’ay, a reordering of the self.

When I was interviewing the Q’ero for my book Masters of the Living Energy, don Julian Pauqar Flores gave me a gift of a khuya, a stone from his misha that I was to place in mine. He explained all the ways the khuya could be used, which I won’t go into here except to say that it has more uses than any other khuya I have. During his explanation, he mentioned the August 1 date, explaining this day of awakening along with a simple but powerful incantation that paqos can say to renew themselves. I pass this incantation on to you, with my added ideas, instructions, and explanations for working in ceremony on this auspicious day. You can work the order of the parts in any way you want, and I change it up year to year, but this is a basic framework for working on Pachamama Day.

As the Apus and Pachamama awaken, we, too, can re-awaken or rebirth ourselves. We let go of the past and proclaim our intentions for the coming year. We claim our independence from who we were and declare who we are going forward. We cut the seqes, the energetic cords, to what no longer serves us and project forward toward the realization of our perfected selves. Thus, it is a day when we tap into the energy both of the living universe and of our personal power to nurture our potential to become enlightened, sixth-level human beings. This work involves personal recapitulation, a personal mast’ay (reordering of the self), and the mast’ay of the misha (personal power bundle).

You can start with a wachay, a rebirthing or recapitulation practice. As with all our of work, it is invisible energy work, done using your intention to move energy and 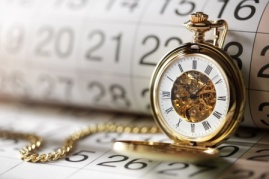 undertake a mast’ay, a restructuring or reordering of the self.

First take a moment to feed yourself and your poq’po with sami to settle and empower yourself. Then, to do a wachay, you use intention to release your hucha (heavy energy), working from the present moment back to the moment of your birth. This process, as you can imagine, can take some time. Don’t rush it. Seek quality and clarity in your energy work. Working back from the present moment, you draw sami into your poq’po while releasing hucha down to Mother Earth, also using your intention to cut the seqes (energetic cords) to anything you feel you need to release or disconnect yourself from—emotions, events, people .  .  . whatever has felt heavy to you. Honor what you have learned, yet also let what is finished be finished both emotionally and energetically. You can choose not to carry this hucha any longer, and Mother Earth is happy to accept your hucha as a gift of her favorite food. This is not an analytic practice, so don’t get bogged down in reviewing situations or reengaging emotions or memories from the past. Simply note where you feel hucha as you recapitulate your life and at each point release that hucha to Mother Earth.

When you are done releasing the hucha through your personal timeline, it is time to renew yourself and focus energetically on your continuing growth as a human being. This is the work that don Julian described in his interview with me back in the mid 1990s. It is time to state your intentions for the coming year—to configure 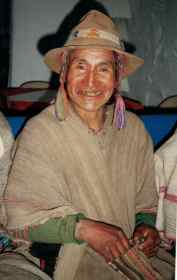 energetically your new inner personal mast’ay. I usually hold my misha while I do this part of the ceremony.

Sit quietly and mull over what you “intend” for yourself in the coming year. Be clear-eyed and sober about this. Distill your intentions down to the absolute most important essentials. Then stand, holding your misha, and declare aloud to the living universe the incantation that don Julian gave me: “I am what I speak, not what I have spoken.” Then speak aloud your essential intentions for the next year.  Speak aloud with clarity who this new you is: your expanded personal capacities and qualities, how you want to serve in the world, the kind of relationships you choose, and so on.  You are stating that from this moment forward you are renewed, you are reformed, you are revitalized, you are realized in a new way.

Once that part of the ceremony is done, you can elect to “reintroduce yourself to yourself,” since you are a newly organized you at the energetic level. Sit quietly with your misha and drop into your poq’po. Be alone with yourself and establish a relationship with the renewed you, the potentially more consciousness and developed you. Get to know yourself and perceive the state of your poq’po at that moment. Take all the time you need.

Because you have “reordered yourself,” at least in potential through your stated intentions, you now need to work with your misha, the bundle of sacred objects that connects you with the lineage of paqos and with your own growth as a paqo. The misha represents your personal power—as it is now. Since you have just released and restructured yourself, it is likely that your misha must be renewed and restructured as well.

The misha is a great eater of hucha, so take a moment to release more hucha from your poq’po into the misha. Then connect your munay (love) with your misha, honoring the lineages of paqos in which you work; any spirit beings, such as an Apu, you feel connected with; or any or all of the seven teqse paqos, or universal paqos/spirit beings. They are Taytacha (Father God/Jesus Christ/Divine Masculine), Mamacha (Mother Mary/Divine Feminine), Tayta Inti (Father Sun), Mama Killa (Mother Moon), Tayta Wayra (Father Wind), Mama Unu (Mother of the Waters, as in hail and rain, not lakes and rivers), and Mama Allpa (Mother Earth). Then sit with your misha and honor how it has served you as a representation of your personal power and a hucha-cleansing bundle. Then open your misha and undertake a 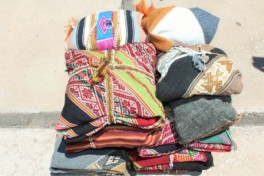 mast’ay, a new ordering of the contents of your misha.

Your misha is a living thing—it represents your personal power. As you grow and change, so does your misha change to reflect who you are. August 1 is a day to open the bundle, connect with the khuyas inside (sacred objects), and feel what kind of changes are necessary to reflect your current state. Some khuyas may be ready to leave your misha. Maybe none will, but commonly you will find that some will. Put them on your altar or return them to nature with gratitude. You might also find that other objects want to be added to your misha. They reflect your progress on the path or important events and relationships that have had meaning for you since the last time you opened and reorganized your misha. Place these new khuyas into your misha with your attention and affection. Remember, misha is the Quechua word for “sign” or “symbol.” Your goal is to have a misha that reflects the current state of your being, of your personal power. When you are finished with the mast’ay of your misha, then “feed” the khuyas, sprinkling them with pisqo (a Peruvian alcohol), wine, water . . . whatever. It is the intention that counts. Your ayni matters more than the outward form of the ceremony. When you are finished, fold the sacred bundle back up in its covering cloth.

You may end the ceremony here, or you may want to offer a despacho. Actually, you can incorporate the despacho at any point in the ceremony. You may offer one after 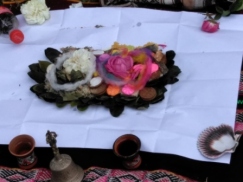 the wachay, to mark the cleansing of hucha and release of any heaviness from your personal past. Or after the incantation and statement of your intentions, honoring your commitment to be a “new you.” Or at the end, to mark the conclusion of the entire mast’ay and honor the spirit beings. Decide what feels right for you. Ceremony should never be robotic. There are no absolutes, especially in method. The Andean path is one of ayni, and ceremony is best seen as the externalization of your internal state, not of following some schematic touted by others. That’s why I say you can do this series of rituals in any order and, really, any way you want. Find what is true for you—that approach is why we call this work the Andean sacred arts. In any case, Pachamama Day is the perfect time not only to reflect on your gratitude for the knowledge offered by the masters of old and through the grace of God and the Spirit Beings, but also to purposefully work your energies as a growing, evolving paqo and human being.

Notes: Photo of mishas copyright Lisa McClendon Sims 2018. Also, this is the last post for about a month, as I am off to Peru.