Some of the most hucha-producing days of my life occurred in 1995 while I was traveling, with several others, to Q’oyllurit’i, a festival held in the

bowl of a glacier more than 16,500 feet above sea level. We traveled on horseback for four days, and the ride was difficult and even frightening, especially the narrow, precipitously steep trails and drop-offs over the cliffs that led to hundreds of feet of nothingness. As unnerving as parts of the trail were, most of my hucha was created by my fear of horses.  As a city girl growing up outside of Boston, the only time I had been around horses was during a visit to a farm. Not knowing any better, I walked behind a tethered horse and the next thing I knew I was on the ground, having been kicked in the forehead. I survived that encounter, but I was not so sure I would this trip to Q’oyllurit’i. I almost didn’t go, but my desire to attend this most sacred Andean festival was stronger than my fear of having to ride a horse to get there.

These were Andean horses: most of them were slung low to the ground, with barrel chests and lungs that chugged like bellows. They had amazing stamina and were sure-footed, but willful. Sometimes there was little I could do to control my horse. The lead rope was hand-woven and frayed, the saddle—if you can call it that—had no horn so there was nothing to grab hold of to steady myself on precipitous parts of the train, and the stirrups were set for a short Peruvian and could not be adjusted for a tallish American. The one on the left was high, so my leg was uncomfortably bent the whole trip and my balance affected.

Needless to say, whenever my horse encountered an especially difficult part of the trail and stumbled, I went over the top. Almost every day I had a fall and suffered some kind of injury: a large hematoma on my right hip

from flying over the horse and smacking into a stone outcropping when my horse slipped going down some wet Inka stone steps; a badly injured knee from another mishap on day two. In some kind of selfish divine justice, I didn’t fall off on the third day—someone else took a tumble instead. Then on day four . . . well . . . let’s just say that because of Latin machismo, and against my vigorous protests, the guides insisted I stay mounted when it was clear I needed to get off that horse. The horses could not climb one portion of the trail that was a huge stone Inka stairway, the steps very deep at the bottom and a struggle for the horses to get up on. Plus, there was a shallow but wide crevasse at the base of the steps. Everyone dismounted and climbed.

But because of my knee, the guys, trying to be nice, insisted they had a way for my horse to make the climb with me on its back. To get around the crevasse, they decided to take me, on the horse, onto a slick round stone to the side that was only a step or two away from one of those terrifying drops to nothingness. Of course, their plan didn’t work. My horse freaked out and tumbled into the crevasse. In one of the few Castaneda-like moments of my life, I leap-frogged backwards off the horse but somehow ended up standing on a tiny ledge just wide enough for my feet that was 90 degrees to the left. How I ended up there defies the laws of physics, but I was incredibly happy to be there. In another miracle, the horse, when they finally were able to extricate him, was unhurt except for a small cut on one lower leg. Anyway, this was a huge hucha-producing trip during which I was pretty rattled and did not remember to do saminchuy often enough to 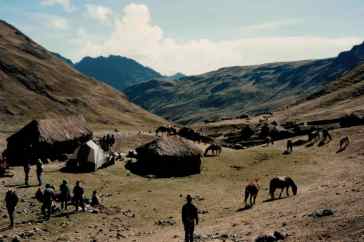 re-establish equilibrium in my poq’po.

I did two major hucha-cleansing sessions. The first night at Chua Chua while visiting don Manuel Q’epsi, I released hucha and pulled sami from him. Juan Nuñez del Prado, my teacher and guide on this trip, had said that when you are with a paqo who is more advanced than you are, you can drink sami from his poq’po. (Remember, sami literally means “nectar.”) When I was with don Manuel, I drank and drank! The other time was at Hatun Q’eros, where we also spent a night and I got some herbal anti-inflammatory help with my swelling knee. There I performed saminchakuy in the regular way, sending my hucha to Mother Earth and pulling sami in through my uma (crown of my head) and filling my bubble and body.

We humans have the dubious distinction of being the only creatures who can slow or stop the flow of kawsay, causing hucha. (The ancient names for sami and hucha were llanthu kawsay, literally “light living energy,” and llasaq kawsay, literally “heavy living energy.”) Although we create hucha whenever we are not living in ayni, or reciprocity, with the kawsay pacha, the most common cause of hucha is emotion. Our emotions fuel words, actions, thoughts, and intentions that can disrupt ayni. The number-one creator of hucha is humans is fear—but not just any fear. 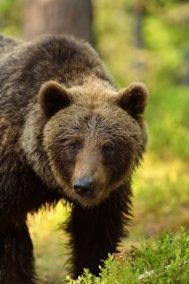 physically threatened. If you are hiking and cross paths with a bear, you probably will feel fear. You are reacting physically and naturally to a potentially significant threat to life and limb. Your emotion is in perfect ayni with the circumstances. Hence, this fear may not generate hucha, although the whole experience may upset your energy. The life-threatening aspects of my trip did not themselves cause hucha. That fear was a normal, appropriate response to circumstances.

But beyond that justifiable fear was fear that was hucha-producing. I was carrying the hucha-imprint of my early experience with horses. Now I was not a girl but a grown woman and could have handled that horse well if I had only acted like an adult and had confidence in myself. My hucha was following me from my past, and I was misunderstanding that past to be true in my present. I also had a lot of self-esteem problems at that time, plus was just generally subject to a low-level constant anxiety about unfamiliar situations where I felt I had little control. So I was producing a lot of hucha.

When releasing hucha, we always refresh ourselves with sami—and we have almost unlimited sources of sami. Although in saminchakuy we tend to pull the light living energy down from the cosmos, in actuality we can pull it in from anything in nature—a tree, a stone, an animal, a cloud, a river. Everything in nature is comprised only of sami, so we have unlimited sources of various “flavors” of sami and can choose the most appropriate flavor for our condition.

For example, if you feel unsteady and at the whim of life’s circumstances, when you perform saminchakuy you might pull sami in from a large rock

formation. Its sami is grounding, steadying, vigilant, “rock solid.” If you feel you are stuck and can’t seem to move in life, perhaps you might pull sami from the clouds, which are always moving and full of life-giving and life-sustaining water. Your only limitation is your imagination when it comes to drinking in the sami of the natural world and cosmos. And your primary responsibility is to do the practices that release hucha and help re-establish coherence in your poq’po. Take it from me: I know how difficult it is to remember to do the practices when you really need them! But better late than never. . .